Galina Istomin is from St. Petersburg, Russia where she studied at the St. Petersburg Conservatory. Before coming to the United States in 1991, she played in many ensembles including the Moussorgsky State Opera and Ballet Theater in St. Petersburg. In this country she has played in the Richmond symphony and the Westmoreland Symphony, among others, and has served as concertmaster for the Butler Symphony. In Pittsburgh Galina has played in the Benedum Orchestra for opera and ballet.

Galina has a private studio of very talented students of all ages. Her dedication to her students has gained her a reputation as someone who is supportive, encouraging, and very knowledgeable about her craft. Many of Galina’s younger students hold section and principal positions in the Three Rivers Young People’s Orchestra and the Pittsburgh Youth Symphony. Galina’s students perform at Heinz Hall and Carnegie Hall in Pittsburgh.

Every music student has their own path and Galina is deeply committed to making their goals a reality. Educated in Russia, Galina received a Master’s Degree from the State Conservatory. Upon her arrival to Pittsburgh, she received an Artists Diploma from Carnegie Mellon University where she studied with former Pittsburgh Symphony concertmaster, Andres Cardenes.

Galina is also performing solo and chamber music concerts in the Pittsburgh area. In addition to the Edgewood Symphony, she serves as concertmaster of the Butler Symphony and Pittsburgh Philarmonic Orchestra. 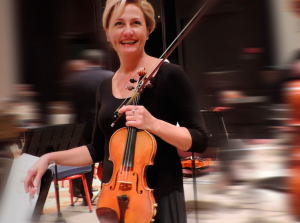